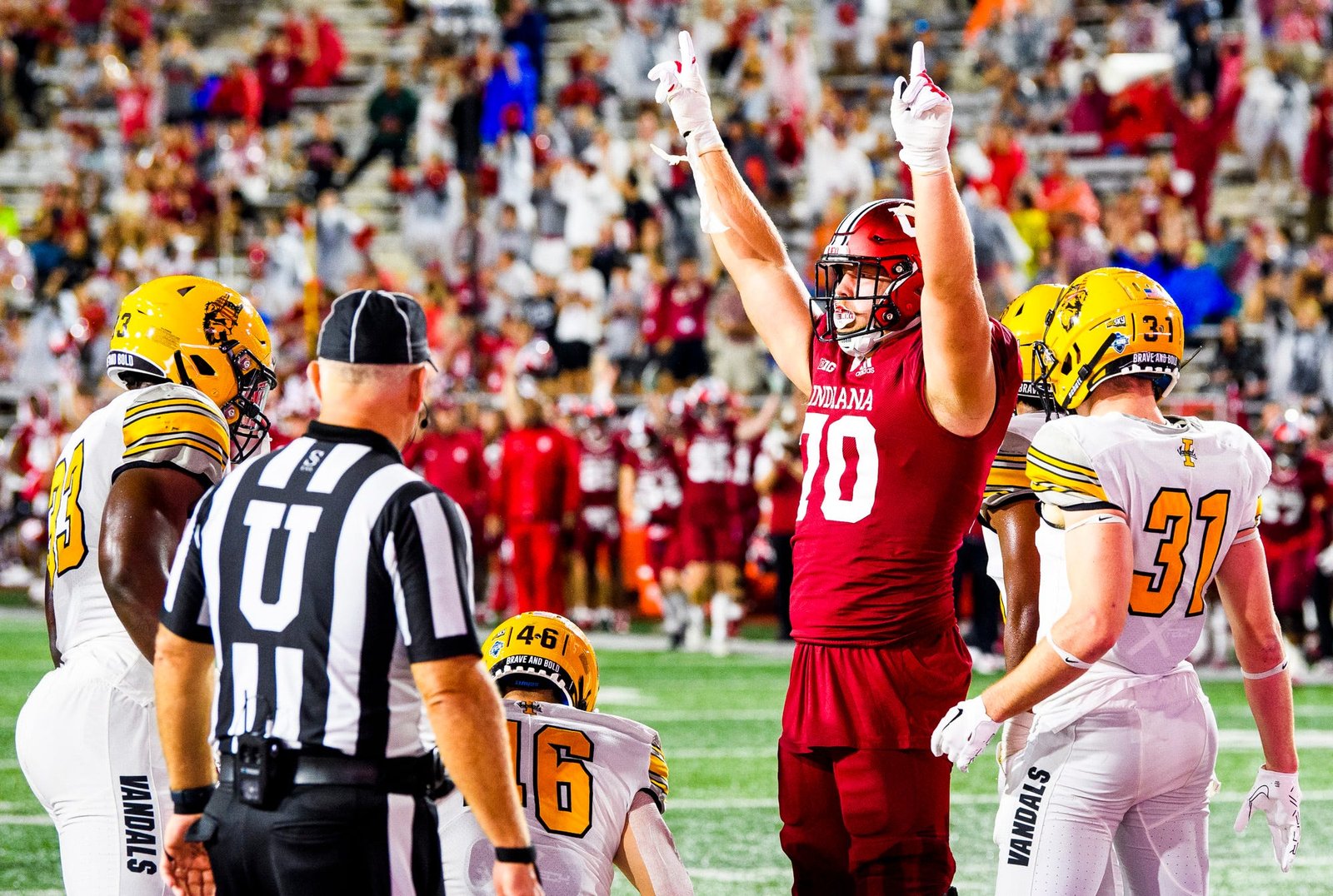 In a 2023 NFL Draft offensive tackle class that’s known for its depth, the scouting report of Indiana OT Luke Haggard frequently falls under the radar. He may not be an early-round prospect, but Haggard is assuredly one of the names to know in the Day 3 range.

There’s something to be said about an offensive tackle who worked his way up from the JUCO ranks and went on to hold his own against Big Ten competition. With 2022 in the rearview mirror, Haggard can definitively say he accomplished that.

There wasn’t a large market for Haggard out of high school. But the product of Petaluma, California, was willing to do whatever it took to earn recognition at the Power Five level. He stayed in-state while hitting the JUCO circuit, suiting up at Santa Rose Junior College. There, he played for two seasons, became a captain again, and earned all-conference honors.

After 2019, teams at the FBS level began to take notice of Haggard’s play, and he transferred to the Big Ten, officially joining the Indiana Hoosiers. Haggard played in six games in a COVID-shortened 2020 campaign, starting four at left tackle.

That would ultimately be a small preview of Haggard’s Indiana career. He went on to start 21 more games across the next two seasons, serving as a mainstay on the blindside for Tom Allen and company. 2022 was his final season and an adequate send-off for Haggard, who now looks to pursue his NFL aspirations.

Haggard grades as a late Day 3 prospect in the 2023 NFL Draft. He’s not among the top offensive tackles in the class, but there’s a definite chance he could command a selection in Round 6 or Round 7, especially if he plays well at the East-West Shrine Bowl.

An experienced starter at left tackle, Haggard has a number of appealing qualities. While he’s not elite in any one area, he’s a good athlete with solid mobility in pass protection. He’s light on his feet, has solid length, and has the footwork to match rushers while resetting his anchor. He’s also a smart blocker whose awareness shows up in both phases.

Haggard is a bit light for his size, and that naturally extends to a lack of elite play strength. He struggles to control his anchor at times, and with his tall frame, managing leverage can be an issue as well, particularly as a run blocker. He also lacks the proven versatility needed to inflate his stock.

Haggard will need to keep getting stronger, above all else. In pass protection, he can further refine his hand usage, and as a run blocker, he can be more consistent in aligning himself and maximizing power. That said, there’s enough mobility and power capacity here to suggest that Haggard can grow into a quality backup or spot starter on the left side with some development.

Is There Thursday Night Football Tonight? 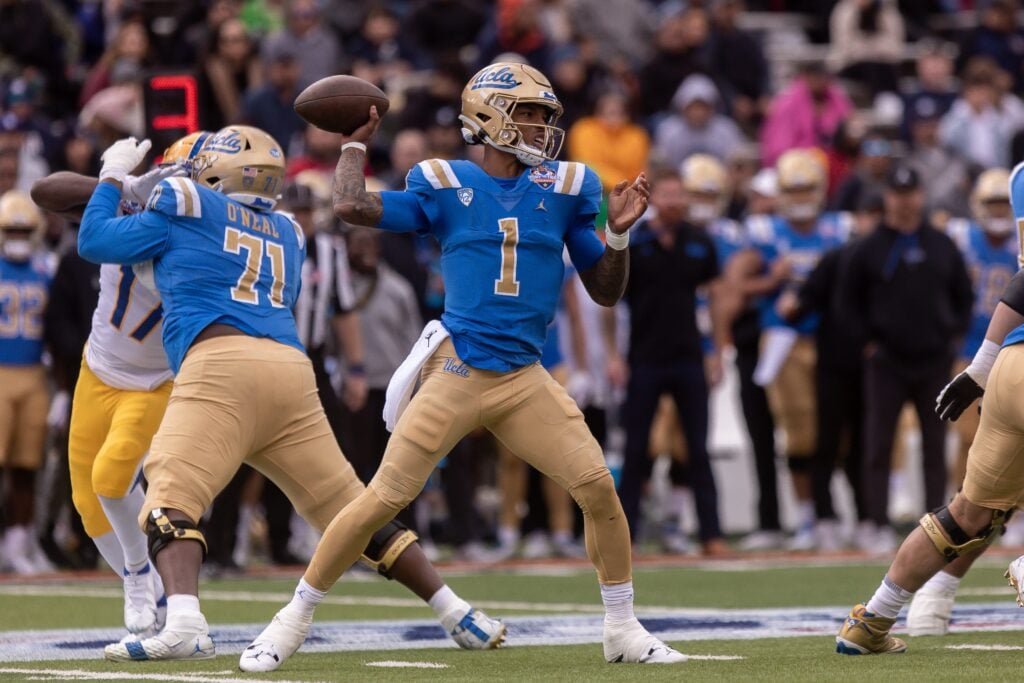 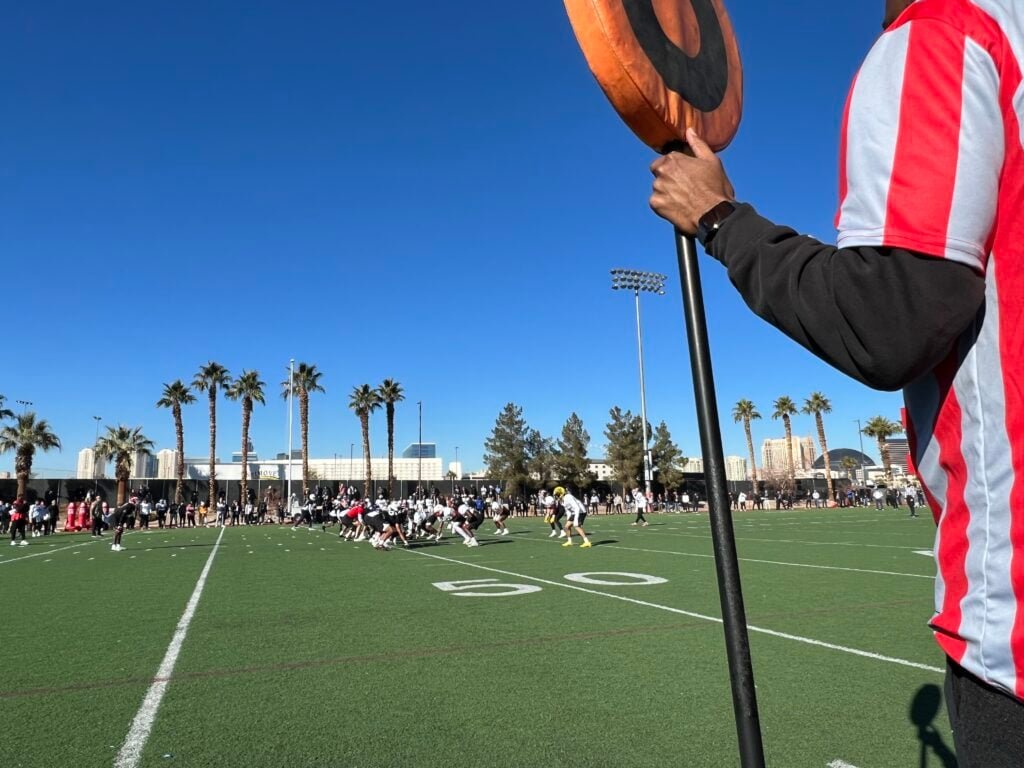 Ahead of the 2023 East-West Shrine Bowl, several players stood out in the week’s first practice on Saturday. After Day 1, who are the risers and sliders, and what kind of impact will it have on their NFL draft stocks?

If there was a single player who really stood out and had a wow performance during the first day of Shrine Bowl practice, it was A.T. Perry. He was dominant in every way.

Perry separated from opponents through his route running, physically beat them down to make the reception, and caught everything thrown in his direction. In a nutshell, Perry could not be covered.

Kei’Trel Clark was terrific during the first practice of Shrine week. He was fundamentally sound, displaying a quick backpedal and fluid hip transition. Clark stayed on his opponent’s hip everywhere on the field to break up passes. He has several outstanding pass defenses
and drew a lot of praise from the Atlanta Falcons’ coaching staff.

Aidan O’Connell was hot out of the gate and was on the money throwing to targets he’s never played with in the past. He led receivers with passes, hitting them in stride or perfectly placing the ball. Even when his throws were a bit off, O’Connell gave his receivers a chance to come away with the reception.

During a post-practice press conference, the former Boilermaker mentioned spending time doing necessary film work in the lead-up to the Shrine Bowl to learn the nuances of his soon-to-be receiver teammates.

Blake Whiteheart looked solid as both a blocker and pass catcher. He fights hard with his hands to separate from defenders, found ways to get free, and made several nice receptions. He’s not the greatest athlete but showed enough ability to get looks as a third
tight end on a depth chart.

Day 1 was not kind to Kahlef Hailassie, who struggled to stop anyone. Whether it be short passes or crossing patterns, opponents were always coming away with receptions.

From the start of practice, Myles Brooks shut down opponents and got better as practice progressed. His ability to stay on his opponents’ hips then burst to the ball and break up throws was impressive. Equally impressive was the leadership Brooks showed, encouraging and helping teammates while he was on the sidelines watching them take repetitions during drills.

Except for dropping one tough pass, it was a flawless day for Demario Douglas. He’s a super quick route runner that defensive backs could not stop. His ability to fire in and then out of breaks was impressive, and he consistently separated from opponents. Douglas also showed a burst of speed and caught the ball with solid fundamentals.

Kazmeir Allen had the luxury of playing with his college quarterback, Dorian Thompson-Robinson, and had a good day overall. Allen’s footwork was outstanding, and he bounced around defenders, leaving them grasping at air. He also caught the ball exceptionally well all morning long.

Terell Smith struggled during the early part of the West practice, then turned it completely around and shut down every opponent by the end of the session. He was terrific covering passes in the short field and, late in practice, made an exceptional breakup in the deep field.

The only problem was Smith did not come away with the interception as he should have! The resiliency to bounce back from mistakes or bad reps is something scouts look for during postseason all-star games, and Smith did a great job of that today. 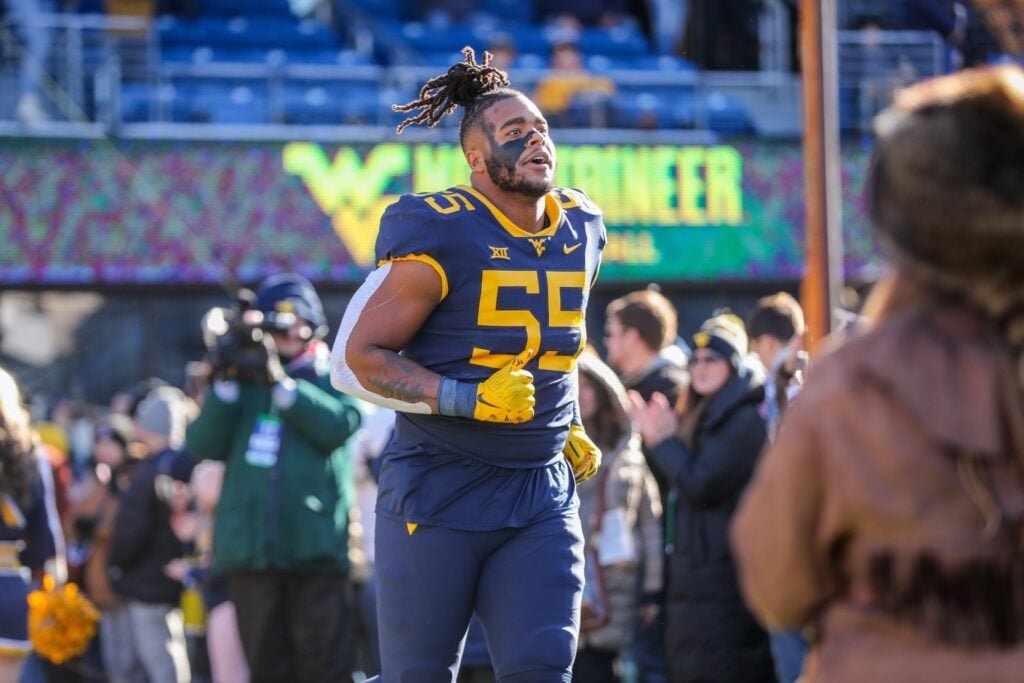 The 2023 East-West Shrine Bowl practices are in full swing, and prospects are putting their skills on display in the hopes of making an impression ahead of the 2023 NFL Draft. Let’s break down the East Team highlights from Saturday’s practice.

You always find the most exciting football in the trenches. There were other stars at the East Team practice on Saturday, but the trenches once again provided a must-watch spectacle, particularly among the interior defensive linemen.

For more from Saturday’s practice at the WR, TE, CB, and QB positions, be sure to check out Tony Pauline’s Risers and Sliders report.

Dante Stills was nearly unblockable all day. He measured in at 6’3 1/2″ and 289 pounds, and yet, his athleticism elicits awe for his size. He showed off high-level agility, flexibility, burst, and leverage acquisition as a pass rusher in both one-on-ones and team drills.

Stills does lack elite strength at the point of attack, and that was evident at times, as was his lack of length. But his spry lateral agility and flexibility make him a threat to swim around blockers at all times, and they also provide him alignment versatility.

The former West Virginia DT is the biggest riser from the trench group from the East Team practice, but he’s not the only one who impressed. Moro Ojomo was a constant penetrator with his quick hands and natural leverage, and his length enabled him to decouple from blocks early in reps.

Kobie Turner from Wake Forest also impressed, using his leverage, compact frame, and quickness to win multiple one-on-one reps. He also showed he can multitask with his hands while flexing around blocks and reducing his surface area.

Nebraska’s Ochaun Mathis was another player who drew eyes. He was one of our biggest risers from official measurements at the Shrine Bowl. His length and wingspan are both rare qualities that were on display on Tuesday.

His length allowed him to snag a deflection at the line in team drills, and his athletic tools and violent disposition both popped in one-on-ones.

It was a stronger day for the defensive line, but the offensive line had its bright spots. It was particularly interesting to watch the prospects who took center reps — Maryland’s Spencer Anderson, Tennessee’s Jerome Carvin, UCLA’s Jon Gaines, and Penn State’s Juice Scruggs.

Of the center group, Scruggs had one of the better days. His strength was evident against Texas nose tackle Keondre Coburn on one particular one-on-one rep. Coburn is not a small human, but Scruggs’ core strength enabled him to gather him within his frame.

Anderson, Carvin, and Gaines all had good reps in the middle as well. Carvin and Anderson aren’t the most agile, but Anderson’s synergetic technique and width make him very hard to offset. Carvin’s leg drive and length proved to be suffocating at times.

Elsewhere on the line, Oregon’s Malaesala Aumavae-Laulu and NC State’s Chandler Zavala had bright moments under the morning sun. Aumavae-Laulu occasionally struggled to maintain his anchor, but at 6’5″, 322 pounds, with 34″ arms, he’s a massive competitor. He brought violent hands in one-on-ones and was able to stack blocks in team drills and redirect torque at the line.

Plenty of those players flashed during practice. The strongest performer of that group, however, had to be Allen. He was another riser from measurements, with a dense 262-pound frame and long 34 1/2″ arms. His speed-to-power proved to be overwhelming at times, but he also flashed surprising bend and cornering ability as an EDGE in one-on-ones.

Cornering ability is something that Ramirez has in spades, and he showed it on a super impressive dip-and-rip during team drills, sinking beneath John Ojukwu’s anchor with ease. Ramirez is smaller and struggled to disengage at times because of it, but his speed and bend give him an avenue to success.

Murphy, Enechukwu, and Thompson all have the tools, but all will be seeking greater consistency later on in the week. Enechukwu is a violent, high-energy rusher, but his hand placement was streaky. Thompson and Murphy both have lighter frames, which showed up as an issue at times. But both are visibly explosive, and Murphy’s lateral agility is a particularly strong trait of his.

On the offensive side, Grand Valley State’s Quinton Barrow was the most notable small-school prospect. He clearly has the necessary size, and on some reps in team drills, he proved he can stay square with opponents and use his width to his advantage. His athleticism is still the ultimate question, as his foot speed was underwhelming at times. More work on his weight transfers could be good for him this week.

Here are more assorted notes from the East Team practice on Day 1 of the Shrine Bowl.

Chiefs vs. 49ers, Bengals vs. Eagles, and More