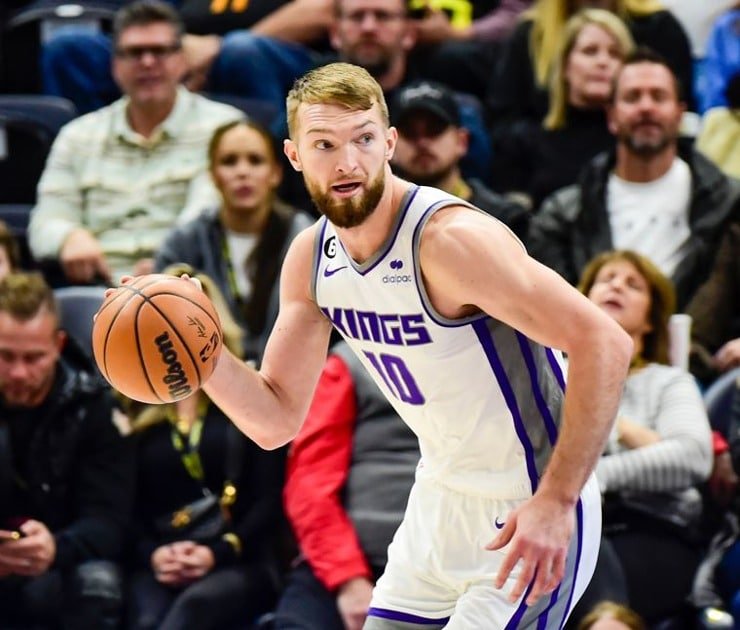 These are all non-COVID illnesses, according to reports. Sabonis missed Wednesday night’s 116-111 win over the Los Angeles Lakers. Although, the breakout star was named Western Conference Player of the Week this past Monday for last week’s clutch performances.

Based on a select few of NBA betting sites, the Kings have 15th-best odds to win the championship. Compare which sportsbooks are showing better odds for the Lakers and Dallas Mavericks.

Through 41 starts this season, Sabonis is averaging 18.9 points and career highs of 12.6 rebounds and 7.1 assists per game. Plus, he’s shooting a career-best 61% from the floor and 38% beyond the arc.

Sabonis has recorded a double-double in a Kings franchise-record 20 consecutive games. On Dec. 28, in Sacramento’s 127-126 win versus the Denver Nuggets, the forward logged a season-high 31 points in 39 minutes played.

As for Alex Len, the 10-year veteran is averaging 1.3 points and 1.3 boards this season through 10 appearances. He’s shooting 50% from the field and a career-high 75% at the foul line.

Additionally, the Thunder are 7-3 in their last 10 games. They’re now on a four-game win streak. However, Oklahoma City is 1-5 ATS and in its past six matchups versus Sacramento. And the Thunder are 1-6 in their previous seven meetings against the Kings.

Win one for the big man. With Domantas Sabonis sitting out due to illness, the Kings went into Crypto and stole one from the Lakers. De’Aaron Fox starred as the Kings beat the Lakers by a final of 116-111. Here are 6 quick thoughts as Sac makes it 5 straight.

Likewise, the Kings have won five straight games. Sacramento is 7-3 in its past 10 contests. To add to these betting trends, the playoff contender is 5-1 in its last six home games versus Oklahoma City. Sacramento has also covered the spread in five of its previous six meetings against Western Conference opponents.

Per ESPN’s Basketball Power Index, the Kings have a 70.9% chance of defeating Oklahoma City at home. Sportsbooks have not yet released the betting lines for this intraconference matchup. 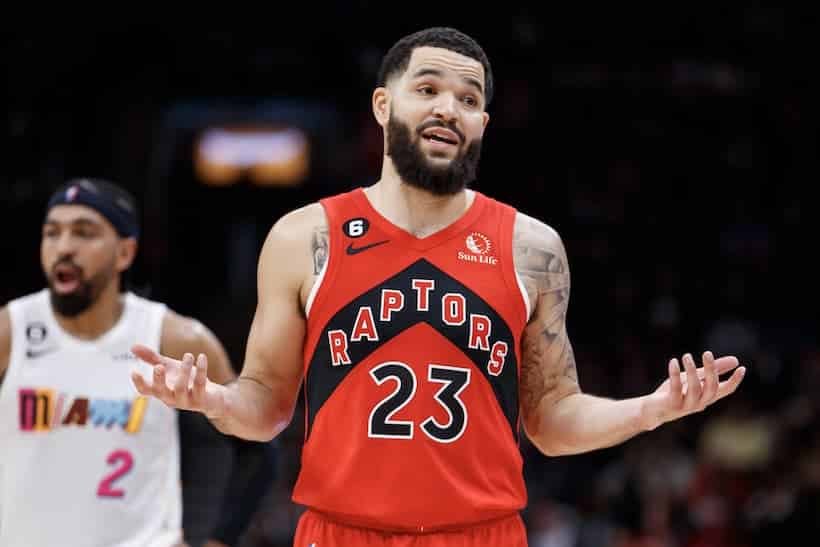 Despite some bumps along the road so far for the Laker, they are still in solid contention to have a nice second half of the season. Anthony Davis has finally returned to the lineup and the Lakers are only 2.5 games out of eighth in the West. They made the first big trade of the offseason signing Rui Hachimura from the Wizards and they might not be done just yet. Raptors guard Fred VanVleet is expected to sign with Klutch Sports and that brings along interest from the LA Lakers.

VanVleet halted offseason negotiations with the Raptors and did not sign and extension. With the way the season is going for the Raptors, almost all of their star players are up for grabs if the trade is right. That includes one-time all-star Fred VanVleet.

California Sports Betting sites have the Lakers at (+2000) to win the Finals this season.

Fred VanVleet to the Lakers? 🤔 @RealJayWilliams

“I think Fred VanVleet can be one of the missing links for this team that can add to everybody personnel wise on their roster.” pic.twitter.com/dDr5HBru8R

According to NBA insider Marc Stein, VanVleet is reportedly going to sign with Klutch Sports. Which also happens to be LeBron James’ agency. Easy to connect the dots there. Here’s what Stein had to say about the Lakers potentially trading for the Raptors SG.

“My pal and podcast partner Mr. Haynes reported earlier this week via Bleacher Report that VanVleet was in the process of hiring new agents in advance of free agency, with the seventh-year guard poised to become an unrestricted free agent unless he and the Raptors hash out a contract extension.” – Marc Stein

In 40 games played this season, VanVleet is averaging (19.1) points, (4.3) rebounds, (6.3) assists, and (1.6) steals per game. The NBA champ knows what he can do well in this league and that is score. He hasn’t averaged less than 19 points in a season over the last three years.

One thing the Lakers are in need of is a consistent shooter and VanVleet could easily fill that role. Besides Lonnie Walker IV or Austin Reaves, VanVleet would possibly be in contention for the best shooter on the team. His field-goal and three-point percentage are down this season, but that doesn’t mean that he can’t be effective in other ways. 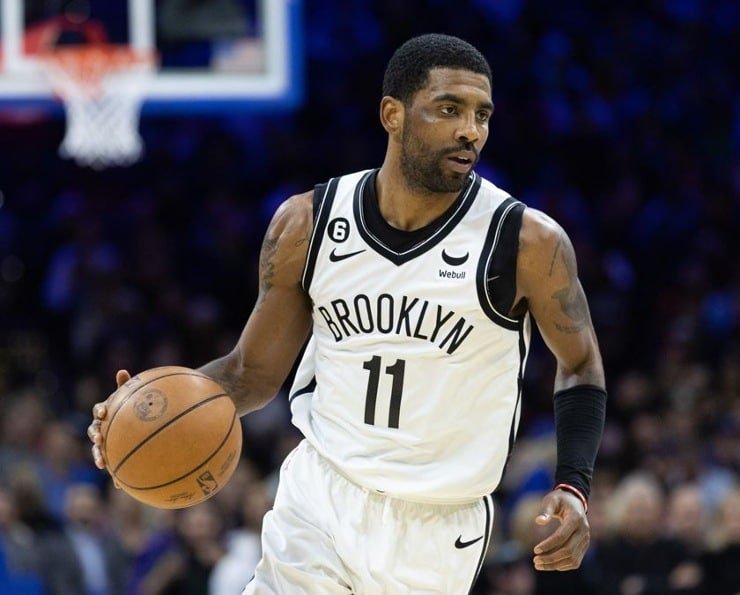 Kyrie Irving is the first Brooklyn Nets player with 30 points and five assists in five straight games in a single NBA season. The eight-time All-Star is the first Net with such a streak since Stephon Marbury accomplished the same feat while playing for the New Jersey Nets from April 30 to Nov. 2, 1999.

Per a few NBA betting sites, Kyrie Irving and the Nets have third-shortest odds to win the championship. Some sportsbooks are giving the Boston Celtics and Milwaukee Bucks better odds.

The five straight games is the longest streak of 30-point games in the franchise’s NBA history.

Additionally, Kyrie Irving joined Marbury, John Williamson, and Kevin Durant as the only Nets players to record 30-plus points in five consecutive games in franchise history. Durant logged 30 or more points in five straight contests from Dec. 10 to Dec. 30, 2021.

However, Brooklyn’s loss overshadowed Irving’s historical night. Detroit outscored the Nets 43-31 on 65% shooting in the third quarter. Saddiq Bey led the Pistons in scoring with 25 points. It was Detroit’s first win in Brooklyn since April 1, 2018. Brooklyn has now lost back-to-back games. The Nets are 4-6 in their last 10 contests.

“They have a tendency to come out in the third quarter and try to win that,” the Nets guard said afterwards. “We came out and we were flat. When you do that and you are reacting to everything, every possession, it makes it difficult.”

“I’m just grateful for the people at home. I would not be here without y’all. Y’all voted me in, and I’m ready to give a show.”

In other news, Kyrie Irving was named starter for the 2023 NBA All-Star Game on Friday. “I’m just grateful for the people at home. I would not be here without y’all. Y’all voted me in, and I’m ready to give a show,” the 30-year-old said. 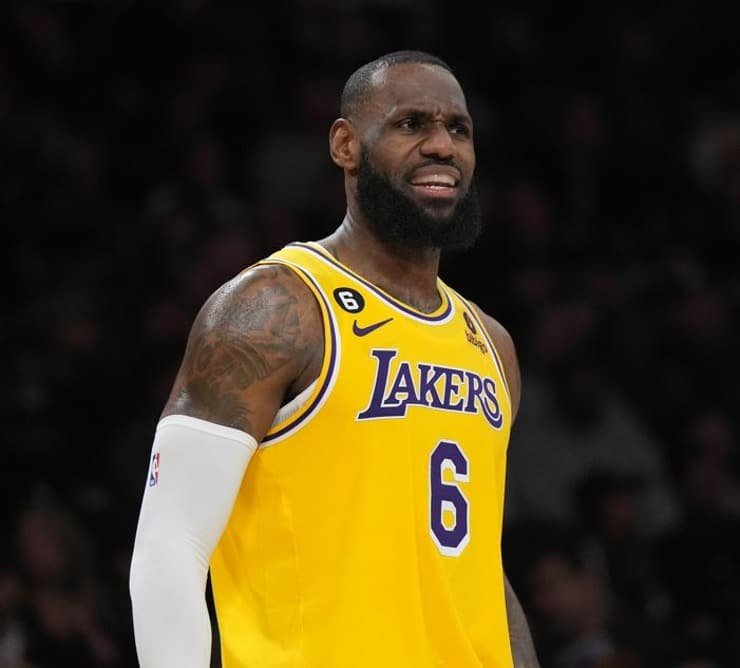 According to a few NBA betting sites, LeBron James and the Los Angeles Lakers possess 10th-best odds to win the championship. Multiple sportsbooks are showing greater odds for the Los Angeles Clippers and Memphis Grizzlies.

James’s 19th straight season being selected to the All-Star Game breaks a tie with Kobe Bryant for the longest streak in NBA history. pic.twitter.com/X4QemJdbLb

On Friday, James and Giannis Antetokounmpo were named captains for next month’s 2023 NBA All-Star Game at Vivint Arena in Salt Lake City, Utah. The four-time NBA champ has now been a captain each of the six years the league has allowed captains to draft their individual teams.

For the first time, the NBA All-Star Draft will take place right before the game. TNT will air the 2023 NBA All-Star Game Draft as a new, live pregame segment on Sunday, Feb. 19 at 7:30 p.m. ET.